It’s a touchy subject for many. Yet this question—how much do you get paid?—is at the core of the online questionnaire that was recently administered by Aiden Oakley (@ajoakley on Twitter). And it is a question that was willingly answered by over 100 sport scientists and strength & conditioning coaches who currently work for football (soccer) clubs in the UK.

This job advert says it all…

Blackpool FC was roundly criticised for advertising such a position for a measly £12,000 per annum. The UK Strength & Conditioning Association then withdrew this job posting from their website. Regrettably, this is not a one-off. Blackpool happened to rightly draw the ire of the Twitter crowd on this occasion, but many of us working in sport have seen too many job ads just like this in our global industry.

So what is the current state of play when it comes to salaries in UK soccer?

Aiden set out to explore this question via a simple survey:

Off the back of Blackpoolgate are any S&C's/Sport Scientists willing to fill in a short questionnaire on salaries in football. Open to Premier League - League 2 and Scottish Premiership clubs,1st team & Academy.Will be shared on Twitter anonymously. Plz RT https://t.co/Gcyqiu0MP2

After a fortnight, 100+ responses were received. I put my hand up to help with visualising the data. This post is the first in a series where I will show how I created the plots that Aiden published on Twitter here and here, alongside some commentary about the choices I made throughout the process and my own interpretations of the results.

Let’s load the cleaned data in and load the necessary libraries. Note: Some variables were omitted during the data cleaning process to protect the anonymity of respondents.

Now that we have the cleaned data loaded in, we can begin to examine it. The data set has 16 variables and 102 responses. For pedants like me, I’ve also included a data dictionary below.

In this post, I will attempt to answer one simple question: What are the reported salaries of performance support staff working in UK soccer clubs when categorised by league?

(It’s worth noting here that this refers to the league in which the club’s first team plays, so it may not be the league that the respondent may predominantly work within, e.g., if they support the Academy programs.)

After a quick exploration when I first started working with this data set, I noticed that salaries varied considerably between respondents. To capture this, I decided to build box plots (to represent ‘typical’ salaries within a particular category), overlaid with a scatter plot where each dot represents one respondent. I also chose to present the the x axis categories such that the leagues progress from higher tier to lower tier as your gaze moves left to right. 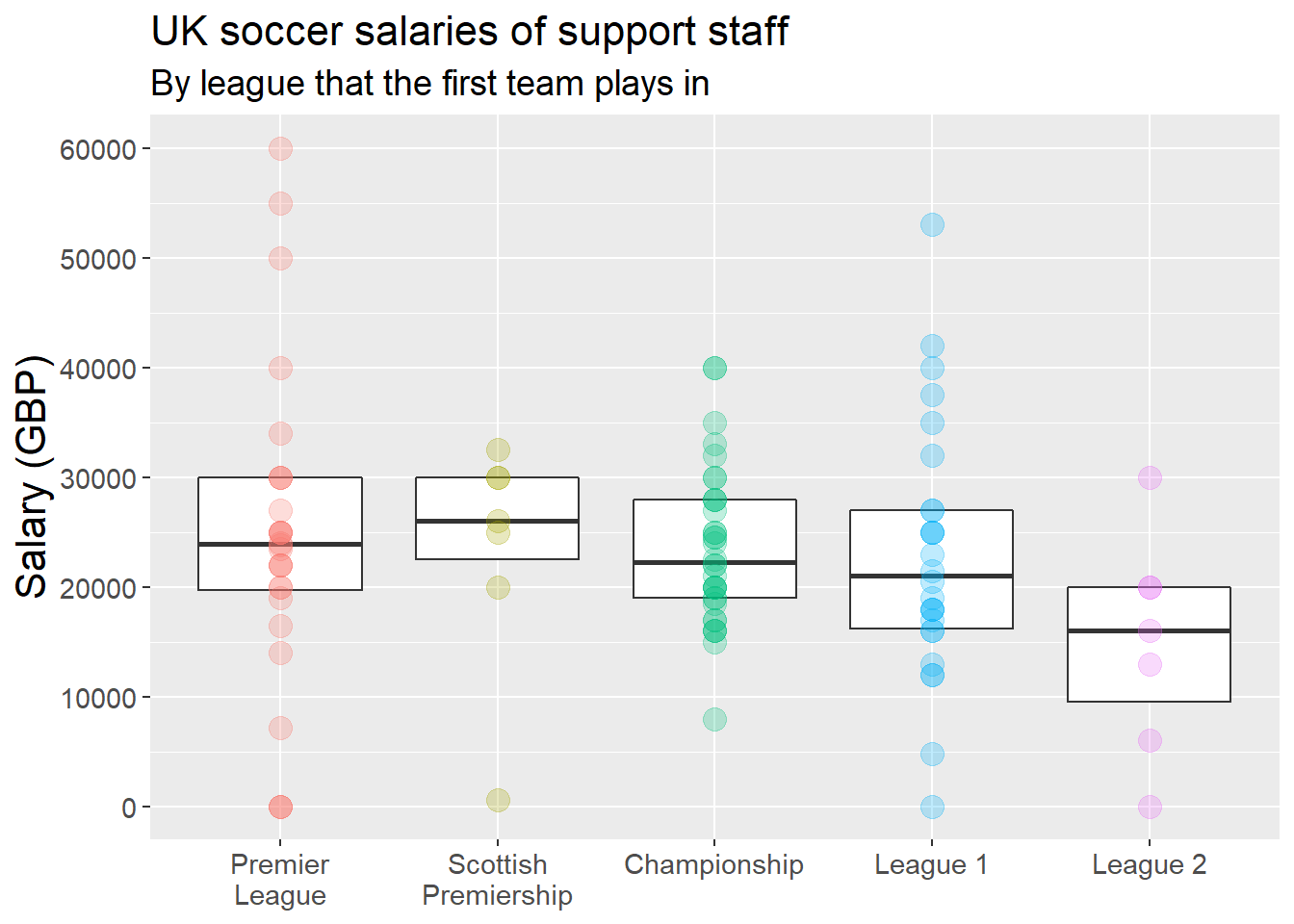 What about median reported salaries?

1. Across the board, typical reported salaries are low.

Dave Carolan wrote on Twitter that the data set lacks representation from sport scientists and S&C coaches in English football who earn £100,000+ per annum. This is a fair critique of the data set. Several responses from higher-paid individuals certainly would increase the typical salaries seen here.

Great work Aiden. I believe that the lack of representation of the £100k+ club should be acknowledged. They exist in the PL & some Champ.

It’s important to capture the true nature of things, but the existence of some better remunerated roles does not take away from the 41 individuals who completed this small survey and reported being paid £20,000 or less. I’d argue that the push for fair wages is chiefly about i) the sustainability and credibility of the industry entire (“Pay peanuts, get monkeys!””), and ii) protecting the most vulnerable, such as those in the early stages of their career trying to get off the internship carousel. If you’re in the ‘£100k+ club’, being underpaid is probably not your personal current experience, although it may have been in the early days of your career. Hopefully, though, you care enough about the industry as a whole to want all individuals to be fairly paid for the work they’ve done (to gain the skills, experience, and qualifications needed to succeed in a given role), and the work they do (in this case, looking after the health, well-being, development, and performance of young men and women through football).

2. Performance support staff working for Scottish Premiership teams appear to be paid slghtly better than their counterparts in the Premier League. Having said that, it’s quite possible that this difference may be due to the small sub-sample of respondents in the Scottish Premiership category (n = 6).

3. There is considerable variation within most leagues.

Salaries by league and competitive level

We can drill down further, plotting the data by league and by competitive level; that is, whether respondents work for their club’s first team or academy. 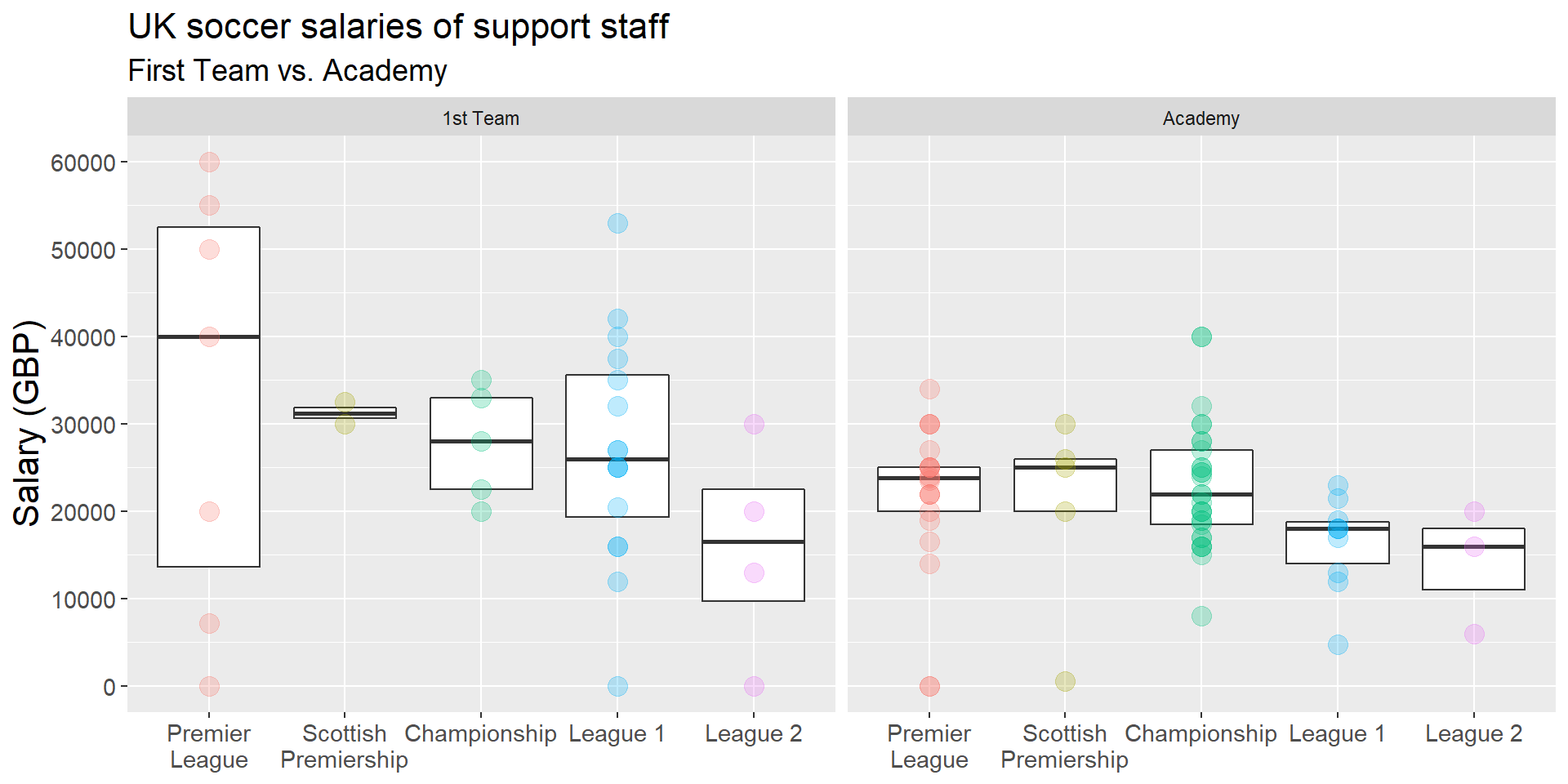 Categorising by league and by what I’ve termed ‘competitive level’ (first team vs. academy) helps to better visualise the salary gradient across the different leagues. This segmentation of the data gives us a better look at salary breakdowns, but also divides the relatively small sample into even smaller sub-groups. For instance, there were only 2 respondents who work for a Scottish Premiership first team, and only 3 respondents who work for a League 2 academy. Anyway, the data is the data, so let’s press on while keeping in mind that the results seen here may not hold with a larger sample and more representation within each sub-group.

Keeping the aforementioned caveats in mind, the results suggest that:

1. The typical salary of Premier League first team support staff (£40,000) is higher than for those who work for Scottish Premiership first teams (£31,250).

2. The differences between leagues are stark in terms of first team staff salaries, while the gradient is not so steep when it comes to academy staff salaries.

In the second post of this series, I will delve into whether staff salaries differ when the sample is categorised into sub-groups by level of job seniority. Stay tuned!